According to the public relations report, Mr. Darvishi, the head of Bushehr Management and Planning Organization, while announcing this news, added: Performance management, which is one of the most important and pivotal issues in controlling, guiding, and leading organizations, is the process of comprehensive performance measurement of executive bodies. In the form of terms such as efficiency, effectiveness, empowerment, and accountability within the framework of scientific principles and concepts of management to achieve organizational goals and tasks in the form of executive programs. The head of the organization also added: “If we want to review the performance, approach, and direction, what is clear is that decision-making and then accurate, wise decision-making in the context of scientific issues and national interests and religious and moral standards has been the basis of work in the executive process.” 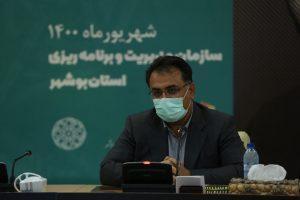 Darvishi added: The process of evaluating the performance of 1399 began in January of last year with the announcement of the circular. Holding an educational webinar, nearly 3,000 hours of expert work has been the result of the efforts of the organization’s group of evaluators in this process. Due to the commitment of the organization to carefully review the documents in some cases during the evaluation period by inviting those involved in evaluating the performance of the executive organs of the province and colleagues of different units of the organization in compliance with health protocols, cases related to face-to-face Is located. What is very important and valuable for the management and planning organization is to create program-oriented thinking and strengthen the spirit of accountability in the executive apparatus. This year, all target organizations (52 organizations) have participated in the evaluation process. He also added: “This year, based on the approval of the Provincial Management Development Steering Council and the need to classify homogeneous organization in terms of missions and tasks in special groups, all participating organizations are divided into multiple groups and documentation.” They were evaluated by a group of experienced experts of the organization. In the implementation of the existing circulars, the preliminary results will be presented in the Provincial Management Development Steering Council after summarizing and the results will be announced at this festival. The head of the organization announced at the end; According to the documents and circulars of the Shahid Rajaei Festival, the selected organizations in different axes and groups are as follows: * A total of two dimensions of general and specific indicators: Water and Sewerage Company and the General Office of Civil Registration * Total general indicators: General Directorate of Taxation, General Directorate of Natural Resources, and Watershed Management. * In the educational, research, and cultural group: General Directorate of Technical and Vocational Education; * Infrastructure and Infrastructure Group: Regional Water Company; * Department of Health and Social Welfare: University of Medical Sciences, Health Services; * General Judicial Group: General Department of Economic Affairs and Finance. He also added; This year, in three provincial indicators, the most improvement compared to the previous year, as well as the absorption of national resources and the use of the capacities of the budget law and the transfer of enterprises, the performance of the executive organs of the province and three organs of the Customs Supervision Headquarters And the General Veterinary Administration were introduced and praised as leading agencies in this regard.

The head of management and planning organization of Bushehr province announced: The executive bodies of the province were obliged to...

1.1% increase in economic participation rate and 0.4% decrease in unemployment rate in Bushehr province

War zone benefits have not been removed

Image report of the exhibition commemorating the holy defense week

1.1% increase in economic participation rate and 0.4% decrease in unemployment rate in Bushehr province

War zone benefits have not been removed

Live TV talk show on the occasion of government week 1401

Behind the scenes of cultural budget growth

Interview with Dr. Darvishi, Head of the Management and Planning Organization of Bushehr Province – Special Program of the Provincial Network – February 2022